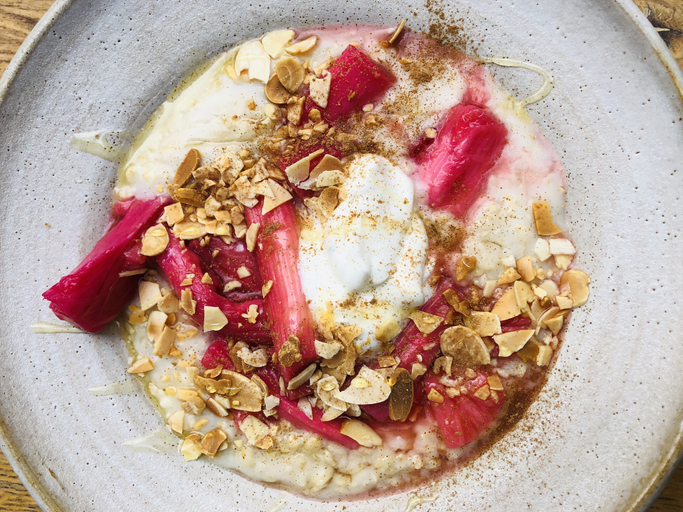 No vegetable is a mere one-tricky pony, but for some reason, the only food that people typically think of when it comes to rhubarb is “pie.” First of all, the fact that any vegetable (yes, rhubarb is technically a veg) can be thought of as a go-to dessert ingredient is quite a feat. However, if all you’ve ever made with rhubarb is this one dessert, you’re missing out on a lot of delicious dish—and health perk—potential. The time has come to expand your recipe repertoire.

The beauty of rhubarb is the tart taste brightens up whatever else it’s cooked with. Even though it is considered a vegetable, its flavor is more in-line with the fruit fam than other veggies; rhubarb is tart with a perfectly-balanced underlying layer of sweetness. And be honest, what’s more fun than a pink food?

Rhubarb is also packed with nutritional perks. Get this: A single serving has more antioxidants than a serving of kale. (And you know how obsessed healthy eaters are with kale.) The antioxidants help protect your cells from free radicals, which reduces your risk of heart disease, cancer, and helps combat chronic inflammation in the body. Rhubarb’s also full of fiber and helps support the digestive system. Rhubarb has been studied for its ability to treat digestive issues and gastrointestinal disorders. A 2014 study even showed that the tannins in rhubarb can help to regulate water absorption in the digestive tract of mice, therefore aiding in the prevention of diarrhea. It’s that good for your gut.

Ready to give it a try? Check out the 10 rhubarb recipes rounded up here.

Get your fiber fix first thing in the morning by having one of these delicious scones for breakfast. Here, the tart veg is paired with strawberries and coconut sugar, which both serve as an alternative to white sugar. This recipe is also 100 percent vegan.

Get the recipe: gluten-free strawberry-rhubarb scones

Another perfect way to pair rhubarb and strawberries together is in these vegan and gluten-free bars. Made with almond flour and walnuts, the nuttiness balances out the tart taste perfectly. Make a batch and enjoy them for breakfast or an afternoon snack all week long.

Get the recipe: strawberry rhubarb bars

If you’re really intimidated by the idea of cooking with rhubarb, start with this recipe. It takes the classic rhubarb-strawberry pairing and serves it up smoothie-style. Note: Cooking the rhubarb first makes it way easier to blend. This recipe also calls for banana and chia seeds—two other great sources of fiber.

Get the recipe: strawberry rhubarb smoothie

Nope, we’re not done making banana bread yet. (Never!) Add rhubarb to the mix and everyone will be wondering what your secret ingredient is. Incorporating the veg into your bread will up the fiber content while adding a whole other layer of flavor.

Get the recipe: rhubarb banana bread

This cake may look stunning, but it’s actually not hard to make. It’s made with whole grain spelt flour which ups the fiber more than using all-purpose flour. Coconut sugar, vanilla, and cinnamon all add sweetness and warmth—there’s no white sugar in this recipe at all.

Get the recipe: rhubarb cake

Photo: Where Is My Spoon

Rhubarb’s natural tanginess makes it the perfect ingredient for making a flavorful sauce. Between the rhubarb, turmeric, and garlic in this recipe, this chicken dish is the polar opposite of bland.

Get the recipe: chicken with rhubarb sauce

In this recipe, rhubarb is baked in the oven right along with salmon for a quick weeknight meal. The whole dish only takes a half-hour to make. Pro tip: Drizzle a little maple syrup on the rhubarb to tone down the tartness and amp up the sweetness.

Get the recipe: baked salmon with rhubarb

This salmon recipe also uses rhubarb, but in a completely different way. Instead of baking it in the oven, it’s made into a tangy sauce that’s used as topping for the chicken. Garlic, ginger, crushed red pepper, sweet chili sauce, honey, and mustard are all incorporated into the glaze, too.

Get the recipe: salmon with rhubarb sauce

Just look at how gorgeous this veggie side dish is. Rhubarb and radish greens are cooked in a skillet with a creamy sauce, made with coconut cream, garlic, scallions, cilantro, chives, and cardamom. Serve it with rice and the protein of your choice for a complete meal.

Get the recipe: rhubarb with radish greens

Tomato soup is tasty on its own, but including rhubarb adds subtle sweetness while still letting the tomatoes be the star of the show. This soup only takes 20 minutes from start to finish, making it a great lunch or dinner option for busy days.

Get the recipe: tomato rhubarb soup 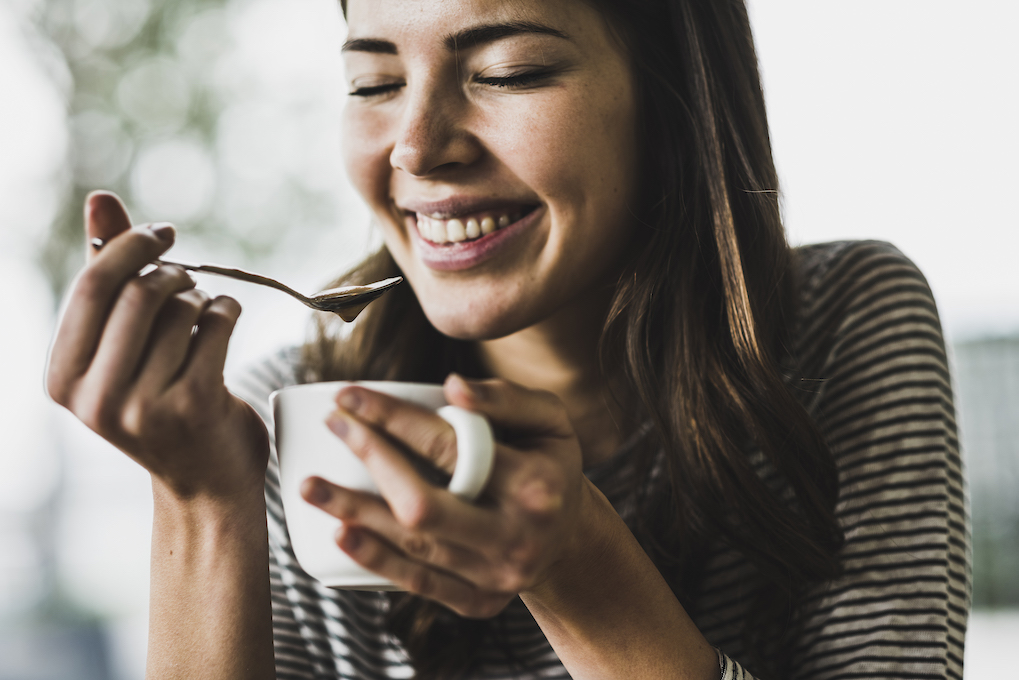 How to Get More Vitamin D, According to an RD 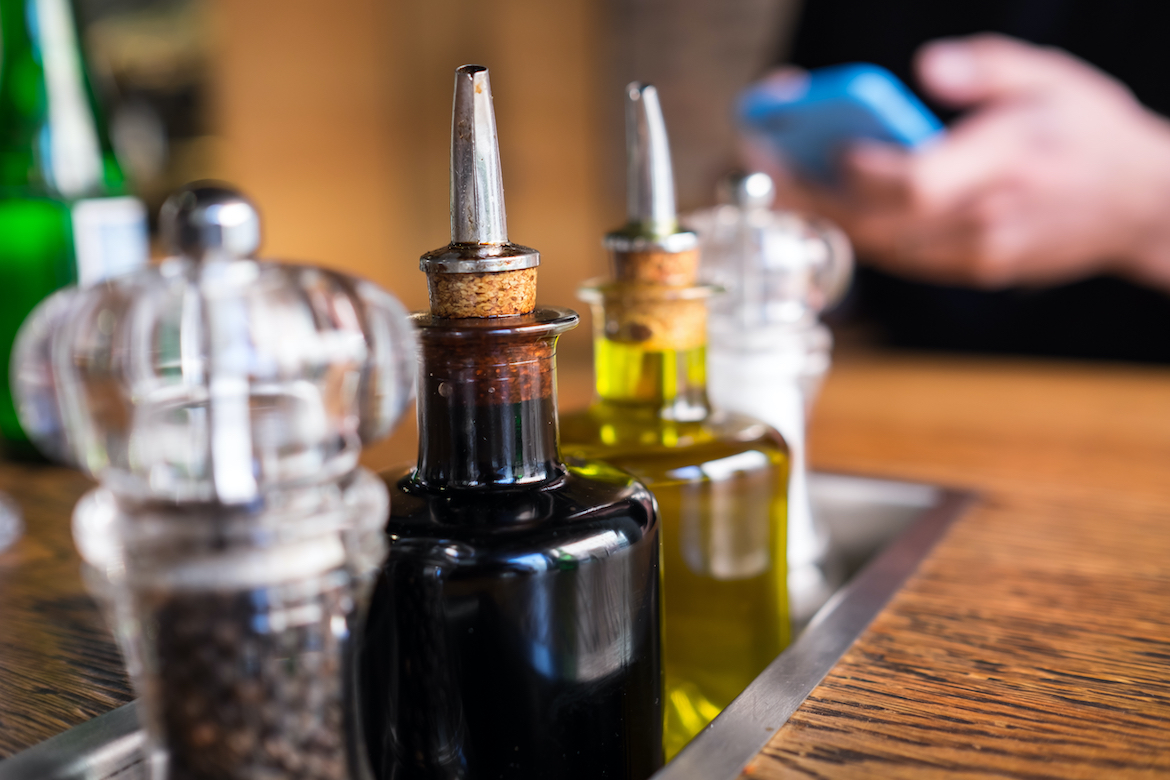 The Best Diet to Fix Your Gut Health